I had often toyed with the idea of a hot air balloon flight, and so to mark a special occasion, my wife Karen and I booked a flight over Bristol from just west of the Clifton Suspension Bridge. A great opportunity to photograph Bristol’s splendid Floating Harbour from above, we thought.

We had booked the flight well in advance believing that late June is the most promising for dry, sunny weather with little wind, and hence conditions to allow a balloon flight..

Getting Started – but where is the start?

Balloons in flight cannot be steered in any particular direction, they are driven by the wind direction. The up and down motion and hence height can be controlled quite precisely though and this was reassuring.

The weather had been wonderful the few days before the flight so we were optimistic that the flight would not be cancelled. We awoke at 4:30am to find wonderful blue skies and very little air movement. We arrived at the arranged take-off field at Ashton Court 3km west of Bristol city centre at 5:45am but were told that the wind direction was not right for take-off from there.

So, we were driven 17km south west to a field near Newton St Loe just 5km west of Bath. So much for a trip over Bristol city! Had we taken off from the original field we would have been blown north over Clifton downs towards the Severn Estuary. We weren’t told about this at the time, but now, extrapolating from our actual flight path shown by the GPS locations in my photos, I’m glad we were taken south west to a new take off point. Someone we talked to on the trip said that on an earlier trip they had in fact been blown across the estuary and ended up in Wales!

There were two other balloons being inflated as we arrived, so this gave us some comfort that we were not lone explorers.

Our balloon was unpacked from a box on a trailer attached to one of our two Land Rovers, the trailer on the second carrying our flight basket. It was all hands to the pump now to stretch out the balloon across the field. Then inflation could start. This is a two stage process, firstly using a giant petrol engine fan to get the balloon neck large enough to safely take the second stage which was blowing fire into the open neck from gas burners on the basket which was turned onto its side. The whole assembly process to get ready for take-off took 50 minutes.

See below for map of flight path.

We climbed and fell into the 2 by 5 metre basket all 16 of us packed like sardines that is 4 people in a 1 by 2 metre compartment – very cosy! The pilot then climbed aboard in to the centre section of the basket underneath the burners.

Then with a continuous 1 minute boost from the burners we gradually started to rise. This was a very slow and smooth process. Surprisingly there were no cries of “let me off, I’ve changed my mind!”. Surprisingly, as we climbed there was no real sense of height and danger as one senses when looking down the outside of a tall building. Even at our flight height of 2000 feet there was no hint of acrophobia, no turning over of the stomach!

The pilot explained how long his training had taken and told us he had 40 years’ experience of flying, which again was reassuring in spite of the occasional flippant tongue in cheek answers to passenger questions about his credentials. He was in constant touch with air traffic control and our Land Rover drivers who followed our flight.

The whole trip was wonderfully serene with occasional interruptions from the noise of the burners which were turned on to maintain height. As you would expect the views of toy town or rather toy farms below were breath-taking. There was no induced stress like on an air liner, no fevered engine noise and no apprehension about what might happen (hopefully not). The wind was probably too light as we only traveled 8km in the hour we were airborne. 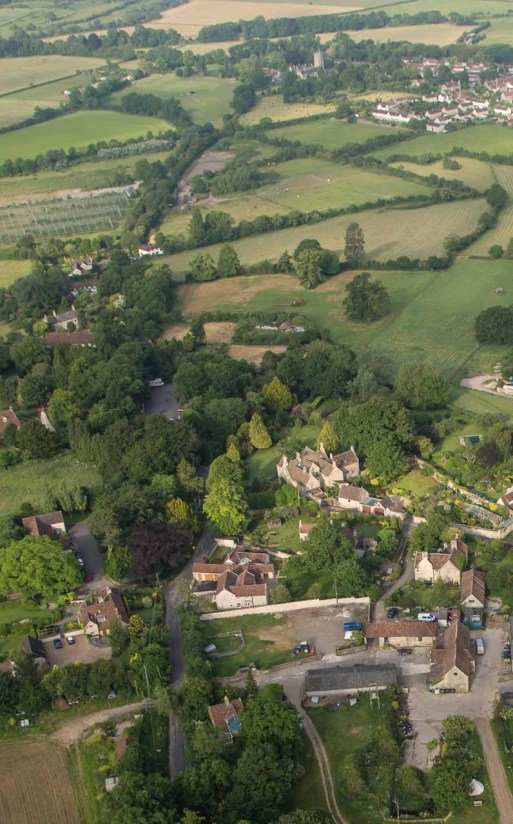 Then it was time to land. This is a process of finding a likely looking field in our wind-dictated flight path then gradually lowering the balloon by pulling ropes to open panels near the top of the balloon to let hot air out so that ground zero was achieved inside the field and not onto a farm house roof! This was no bother at all from our skilful and ultra-cool pilot. 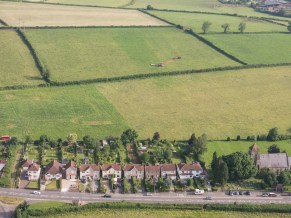 Once down on the ground we men steered the basket into short grass and the balloon was gradually deflated. All hands to the pump again (well mostly the men!) to fold the stretched out balloon into a long strip. Then we helped man handle the balloon metre by metre into the travel box – quite hard work, especially for the boss man who had to create folds in the balloon before loading into the box.

Once packed up, and thanking the farmer with a bottle of scotch, we drove a short distance to a lay-by and succumbed to the Champagne. Then there was a ½ hour drive to our 5:45am venue and that was that.

I would say that the experience was very engaging, exhilarating at times and always enjoyable with great bonhomie created amongst crew and passengers.

Looking later at our trajectory, had we set off from the original place 8km would have taken us within 3 km of the Severn Estuary and who knows what effect air currents west of Clifton Downs would have had.

We would definitely recommend the trip but one needs to be prepared for cancellations on the day – one young lady said this trip followed 6 cancellations beforehand!

Oh well, at least our flight wasn’t cancelled. Next time…